On December 28, 1662, a woman named Mayken van Angola pursued freedom in New Amsterdam. She did not stand alone. Two other women—Susanna and Lucretia—stood with her and together, they petitioned the colonial government for their freedom. It was granted with the caveat that they must clean the Director General Petrus Stuyvesant’s house once a week as a condition of that freedom.

The compelling story of Mayken and her friends has featured in several accounts of New Netherland’s early life. Mayken herself was likely one of the first three enslaved black women to be brought to the Dutch colony, and her name is one of the first references we have to an enslaved person. Her first name—Mayken—connects her to the broader Dutch diaspora, and her last name Angola connects her story to West Central Africa. She was enslaved by Geoctrooieerde Westindische Compagnie (Dutch West India Company or WIC) for three decades of her life, a fate that links her story to generations of people pulled into the vortex of enslavement by the Dutch company’s branch located in Amsterdam.

We know that during her life in the colony of New Netherland and, in later years, English New York, she lived within the community of African and African descended people, was married to a free Black man named Domingo Angola, and stood as a baptismal witness alongside white Dutch settlers for an African descended child in the community. She is rightly considered an important and founding early American woman who fought for and won her full freedom.

Looking at the evidence

The decision to set Mayken and her friends free with the qualification that they continue to clean Petrus Stuyvesant’s house, and the strenuous nature of that requirement, is a crucial element of the story that connects their lives as working women in New Netherland with the experiences of other laborers in the Dutch Republic and across the Dutch empire. This blog will explore various ways of uncovering the reality of these women’s lives and what we can learn about their enduring impact.

The digital explosion that occurred in the wake of the COVID-19 global pandemic has brought researchers, learners and scholars in the Netherlands and the United States virtually closer to share ideas, documents, and experiences in a joint effort to make the stories of enslaved, bonded and free African and Indigenous people a more central part of the Dutch American narrative. Now it is possible to imagine and explore the worlds of people like Mayken and her friends in new ways.

These stories take a good measure of detective work and require a bit of sleuthing: the documents offer us tantalizing hints but leave so much more unstated. They also require wrestling with uncomfortable and painful parts of the shared American Dutch past. Using different types of evidence, we will explore the daily working lives of Mayken, her friends and their connections to American Dutch relationship.

In some ways Mayken and her friends’ experiences were exceptional: they were married, members of the Dutch Reformed Church, and able to sue for their freedom. But their lives also reflected the struggles of existence within a system of bondage and unfree labor. When Mayken approached the colonial government again, Susanna and Lucrecia had died. Precious little has been reconstructed of Susanna and Lucretia’s lives and experiences, but the loss of their companionship must have been a grievous blow. They may well have succumbed to smallpox which raged during the winter and spring of 1662 and 1663. Mayken requested to be freed from the obligation of cleaning the Director General’s house because it was a much too strenuous job for her, explaining that she was elderly and suffered from an old injury presumably the result of decades in bondage. What kind of work faced Mayken and her friends at the Stuyvesants’ house?

The documents do not clarify which house the three women were tasked with cleaning. The Stuyvesants resided in two main properties on Manhattan: a two-story bowery house, and a grander stone mansion owned by the West India Company, that was ultimately confiscated by the English along with all company property as part of the colony’s capitulation. Given their status as formerly enslaved by the company, Mayken, Susanna and Lucrecia likely toiled at the WIC-owned property that was renamed Whitehall by the English. The Stuyvesant family remained in the bowery house for a century before later descendants built other properties on Manhattan, one of which was a house destroyed during a fire in New York city along with most of the Stuyvesant family papers.

The management of the household would have been the primary responsibility of Judith Stuyvesant, Petrus Stuyvesant’s wife, and she would have likely been the main person from the Stuyvesant family that Mayken, Susanna and Lucretia interacted with daily. Judith had been born in Breda, married Petrus in 1645, and arrived in New Netherland with him in 1647. Both Stuyvesant houses would have been part of the daily geography of enslaved, bonded, and free Black residents of New Amsterdam. The bowery house was surrounded by a multiethnic village of people, including free Black people, who had been settled there at the conclusion of a war with the Esopus (a local Lenape group) in 1659 and 1660. It was also a site of enslavement. When the West India Company sold the bowery to Petrus in 1651 it came with the unfree labor of two enslaved Black boys. Enslaved laborers would be a permanent feature of Petrus, Judith and their two sons Balthazar Lazarus and Nicolaes Willem’s lives.

In the Dutch Republic wealthy and middling white women were expected to manage a household with varying degrees of servant labor. As Diane Wolfthal has demonstrated in her research featuring Dutch golden age dollhouses and paintings of domestic scenes, this theory of rule included clothing intended to make rank clear, as well as secret passages and storage designed to mask the labor within households. Such assignments would increasingly become linked to non-white labor in the Americas, a process underway but not fully complete as Judith began to manage her American households. Enslaved and bonded laborers, like Mayken and her friends, would work alongside European and Indigenous people, but be used as domestics, filling the lowest ranks of the household hierarchy. The work that they were required to perform was arduous. Special tools were necessary to clean windows, sweep stoops and other dirty jobs. It was physical work that required hoisting, pulling, carrying, scrubbing, laundering, and bending.

Judith Stuyvesant’s will dated 29 January 1678/9 and proved 15 March 1686 includes items Mayken, Susanna and Lucretia could have been tasked with cleaning, including furniture and dishes—“China Earthen Ware,” “Three great potts” and a “black Cabbinett of Ebbon wood with the foot or frame belonging to it,” as well as “linen,” and Judith’s “wearing apparrell of Silk and wooleen.” Ebony cabinets were maintained by rubbing waxes and oils into the wood. During the seventeenth century, linens were laundered by hand in waterways. Deep cleaning required urine, lye, boiling water, paddles or washboards—a taxing process that affected the health of working women.

Mayken’s plea, which rested on her years of service and the strenuous nature of the labor, convinced the colonial government and she was granted her full freedom. Scholars have also argued that her place in the community and physical location was a crucial part of her case’s favorable outcome. As Susanah Shaw Romney and Andrea Mosterman uncovered, Mayken and her friends were part of a community of Black people that was settled near the Stuyvesant’s bowery. That community was part of a larger multiracial village that surrounded the bowery. This village and its mixed community would remain a feature of the area well into the eighteenth century; its inhabitants would pass down the names of original settlers like Mayken.

The chapel erected on Stuyvesants’ bowery became an important landmark for this community. In the decades following the fall of the Dutch colony, village couples would marry and baptize their children on the bowery. In 1672, two Black couples—Anthonij Backers and Maijken Arta, and Willem Anthonissen and Margariet Pieters—were married on the bowery. Their names reflected community memory and histories entangled with Dutch slaveholding families. Anthonissen and Pieters were free Black families who had roots in the earliest days of New Netherland. Mayken Arta’s husband Anthony had the family name Backers, which was most likely a connection to Jacobus Backer, Petrus Stuyvesant’s brother-in-law who held several enslaved people.

Though Mayken van Angola and other free Black people lived out their days in the bowery community, the village and the colony remained served by the forced labor of enslaved people. In later generations when the bowery was rented out, it was sold along with the labor of two enslaved men named John and Samson. In the middle of the eighteenth century, eight enslaved people—Gansey, Dick, Syphax, Primus, Scipio, Peg, Mary and Lucy—who lived and toiled there were passed down by Gerardus Stuyvesant to his sons Petrus and Nicolas. Three of them, Syphax, Primus and Scipio would run away only to be pursued in the local papers by Petrus Stuyvesant, the former Dutch leader’s great-grandson.

The stories and experiences African descended people, like Mayken, and so many others, who lived and labored in the New Netherland and across the Dutch empire, capture several central themes that have marked Dutch American history and the legacy of that relationship: friendship, bondage and freedom. Efforts to excavate and thoughtfully tell their stories continues to link scholars, researchers, and learners on both sides of the Atlantic.

Nicole Maskiell is a historian, and scholar of slavery in Dutch and Anglo Dutch America. She received her PhD from Cornell University in 2013 and is currently an Assistant Professor of History, Director of Public History, and McClausland Faculty Fellow at the University of South Carolina. http://www.nicolemaskiell.com/

This blog is the second of a monthly series with stories from the rich history shared by the American and the Dutch people. Authors from both countries will present various stories of their own choosing, from a wide variety of perspectives, in order to provide the full of triumphs and heartbreaks, delights and disappointments that draw from hundreds of years of shared history. Not all stories will be ‘feel-good history’. While the relations between the Dutch and the Americans have for the most part been stable and peaceful, the shared history contains some darker moments as well. Acknowledging that errors have been made in the past does not take away from the friendship but, rather, deepens it.

This story was first published on the 19th of May 2022 on the website of the Dutch National Archives.  All (upcoming) stories can be found here.

1. Request of Mayken van Angola, Lucretia [Albiecke] van Angola and [Susanna] Tamboer, 28 December 1662. They “humbly pray and apply to be unburdened and delivered from the slavery in which they have been until now and to be given a free station in order to seek with their labor their board and livelihood besides other free negro men and women.” The reply: “The applicants are granted the request that they made on condition that one of them three will by rotation come every week to do the housework of the Lord General.” New York State Archives. NYSA_A1809-78_V10_pt1_0296. https://digitalcollections.archives.nysed.gov/index.php/Detail/objects/55199. 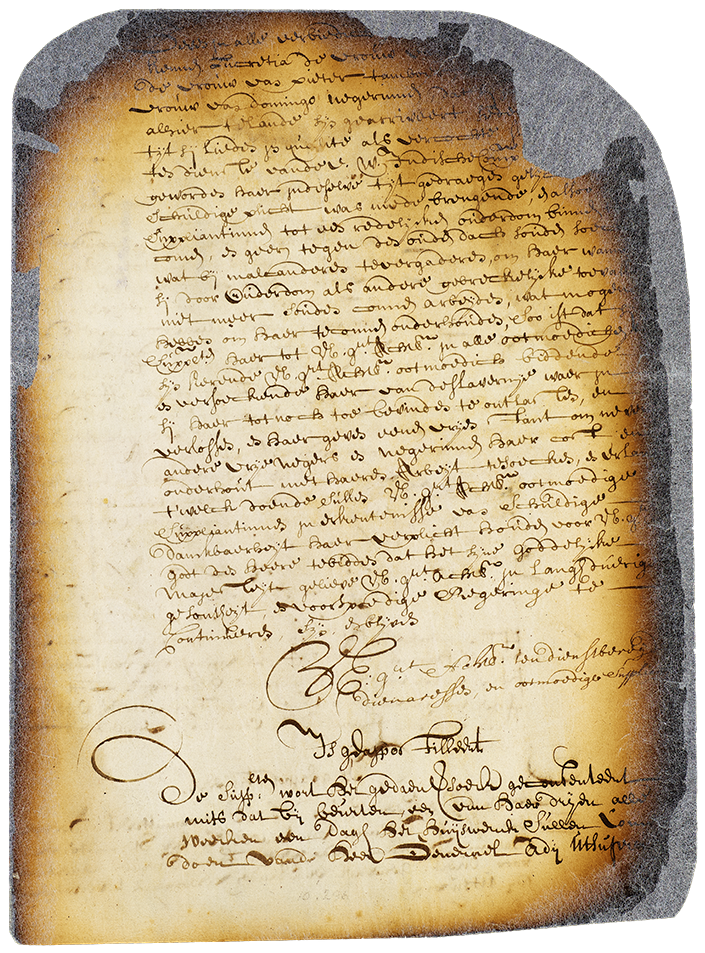 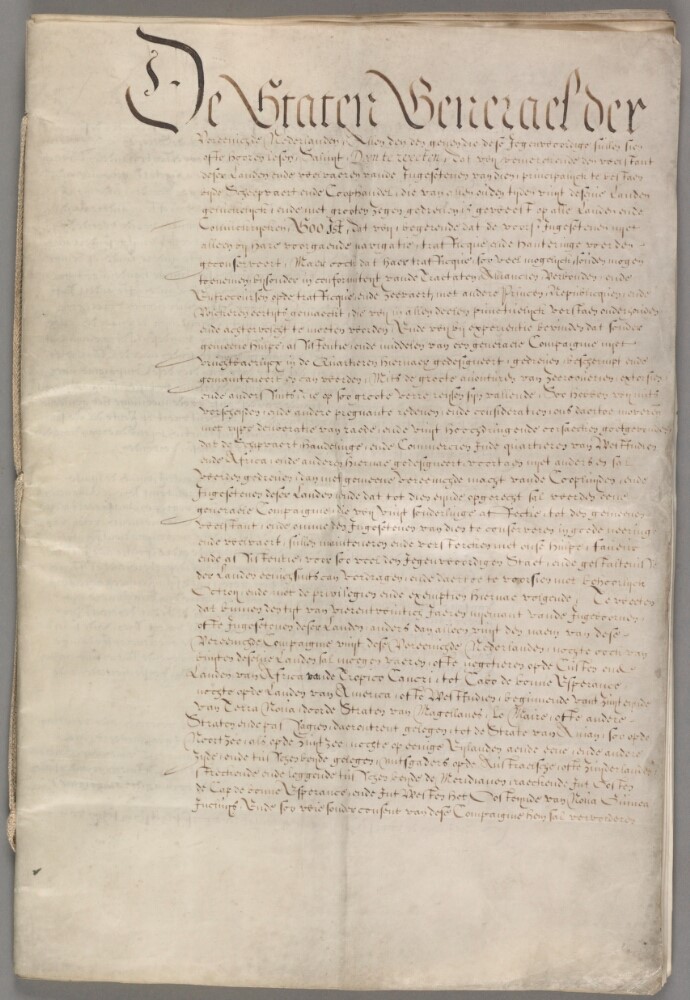 3. Bust of Stuyvesants, photo by author 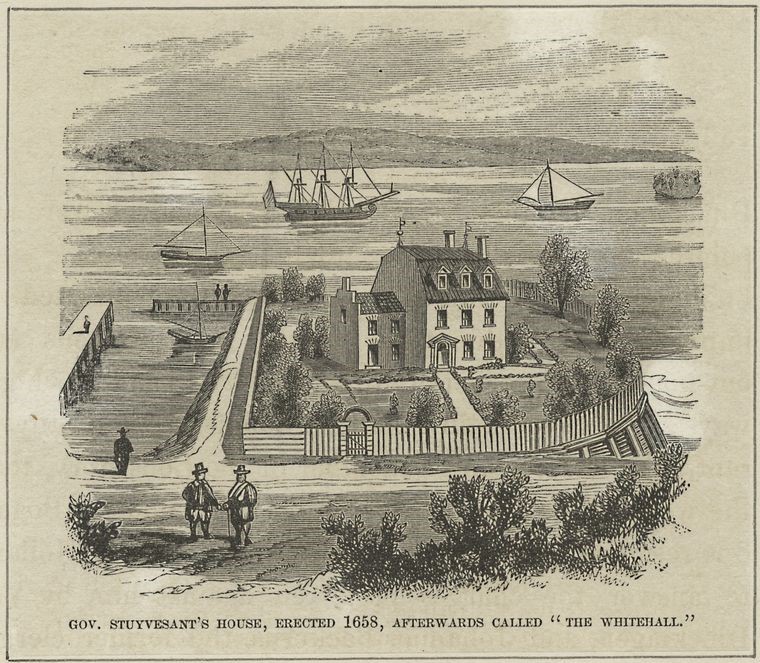 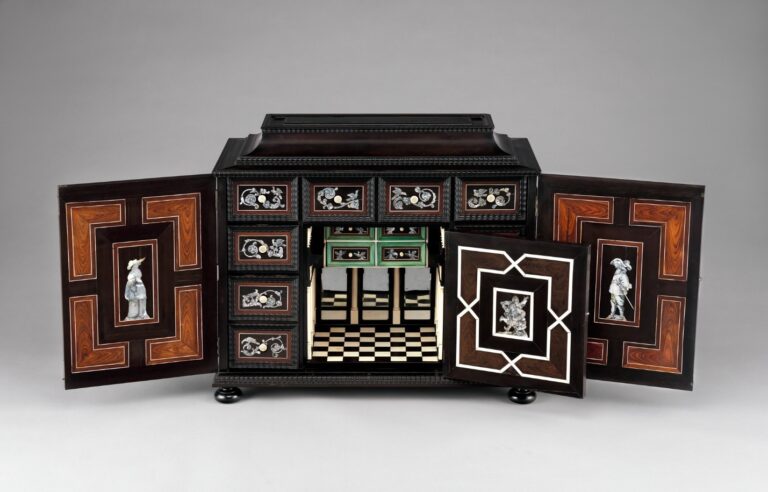 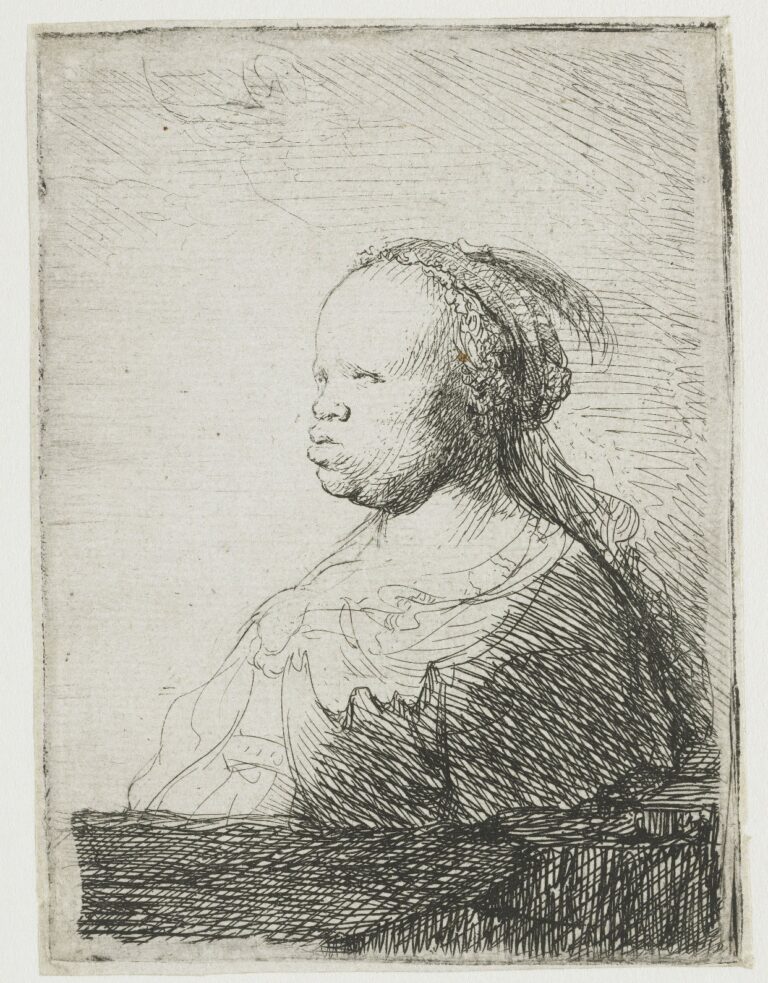 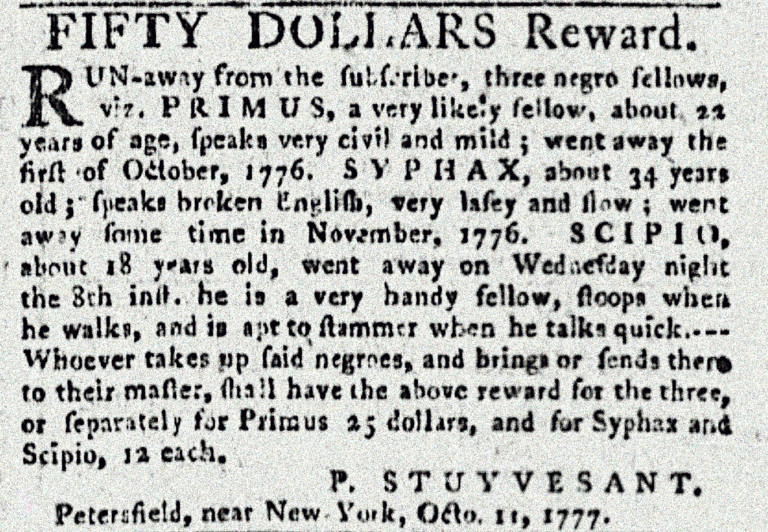 Romney, Susanah Shaw, “Reytory Angola, Seventeenth-Century Manhattan (US),” in Erica Ball, Tatiana Seijas and Terri Snyder (eds.), As If She Were Free: A Collective Biography of Women and Emancipation in the Americas, 58–78 (Cambridge: Cambridge University Press, 2020).